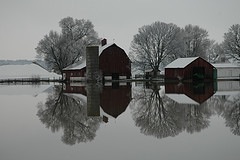 The Boston Globe has an interesting article on how the updated National Flood Insurance Rate Maps (FIRMs) did in last week’s floods there. In a word: well.

This wasn’t good news to many who were sure the the updates, which had designated their properties as high flood risk, were wrong. Some were even fighting to try to change the maps. No more.

“They were right,’’ said Jackie Wolfrum, 48, who lives on Harrison Avenue and wishes she had bought the flood insurance that would have helped pay to replace her damaged boiler and water heater.

“All of a sudden, I’m thinking, ‘How ironic,’ ’’ said Ellen Pridham, a Columbus Avenue resident. Pridham and her partner, Ed Sweeney, both 57, were pulling sticky golf clubs, water-filled pots, and other debris from their basement, which had been filled with 4 feet of sewage-contaminated water. “Everything is destroyed,’’ she said.

Interestingly, the article mentions that some feel the flooding was exacerbated by development, and that the guilty ought to be held responsible.

Others said the flooding had less to do with nature than run-off caused by new development, or faulty sewers that exacerbated damage.

“There is a sense something has changed here,’’ said Brett Flehinger, 43. “We deserve compensation.’’

Maybe time for a review of the Interpreting FIRMs and FIS Reports, legal and NAI sections?

“Flooded with evidence” (The Boston Globe)