Editorial Advises Better Planning and Building, NOT the Ike Dike 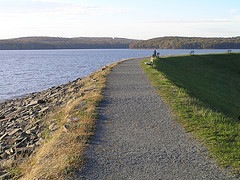 A new Houston Chronicle article argues that building the so-called “Ike Dike” will put more, not less people and property at great risk, and that the best way to protect property from hazards is to keep them out of hazardous areas.

In “Forget the Ike Dike, let’s improve building methods” Texas A&M professor John Jacob says that while the current economic downturn has slowed new construction, that more is clearly ahead.

“The Houston region will continue to grow as it has in the past when this recession is finally over. Where will this growth go? Too much already is happening in low-lying areas of Galveston and Brazoria Counties. So much development has occurred already in these areas that some insurers are pulling out altogether because of too much exposure. The presence of a large dike, especially if touted as infallible, would increase several-fold the amount of development, just as happened in New Orleans.”

Definitely worth a read.